Let's start at the beginning, shall we? 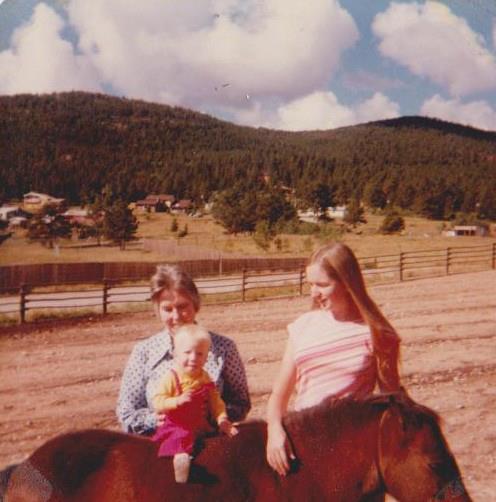 I've been riding all of my life. Love of horses is in the blood on my mother's side.  I remember my grandpa telling me about working on a dairy farm in Arkansas where he grew up, the best part of his day being when he got to ride a horse there called Surprise.  My grandpa was noble and gentle - you can see the admiration in his eyes in old photographs, especially those with his favorite horse, Kishta.  I was so proud when he told me how beautiful he thought Coro was - their trip to our house after I bought him would be his last. 
I wish my mom was still here to share all the details of getting her first horse, Taffy, a palomino Arabian cross.  I never tired of those stories.  They got Taffy for her after it was apparent that Nitro, the black colt, was going to be too much for her and instead became my grandfather's horse, although they eventually sold him.  After my mom had Taffy a while they bred her to a stallion called Amir Batal at Joder Arabians.  When we were going through some of her things last summer we found the receipt from the breeding and a note from Mrs. Joder that said to "ride Taffy on down" for her re-check to see if she was in foal.  She was, and gave birth to a filly who would stay with her mother for her whole life.  They registered her as Kishta Lau Amira, "cream-colored princess" in Arabic.  My grandpa broke and trained her himself and they had a special bond.  I think my mom was happiest when Kishta was weaned and she and Taffy were free again!  She rode all throughout her childhood and college, bringing friends to ride, taking the horses on camping trips and once riding all the way to Golden.  When my aunt Shelley, eight years younger than my mom, was old enough to ride, they got Ginger for her, a dark bay Shetland pony. My grandpa also trained her to pull a cart. Mama and Taffy with Ute Mountain in the background. In my family, horses are for life.  Taffy lived to be 36.

My mother held me on Ginger's back as soon as I could sit up.  I also had a little butterscotch-colored horse with four red wheels that I named Taxes.  It was a word I had heard my parents saying, and it seemed like a good name for my mount!  At some point I graduated from being led to riding Ginger myself.  Ginger was a typical sassy pony but she was happy to tag along with the big horses for family rides.  We spent many afternoons on the steep and winding roads of Coal Creek Canyon, always with my mom's three-legged dog, Om and my grandparents Airedales, Cinder and Tio-Keet, in tow.  My mom usually led the way on spirited Taffy.  Papa or Grandpa would ride Kishta, a stout buttery powerhouse with a tendency to buck.  My grandma rode her bright chestnut Welsh-Arab mare, Tinker.  Tinker was certainly the most tractable of the horses, never spooking or acting mare-ish, but Grandma still insists she was always afraid of the horses and I have heard the story of Tinker dumping her because of "The Penner's pigs" many times over.

Horses have always equaled independence for me and maybe that is why I still prefer to ride alone.  I remember trotting ahead on Ginger and pretending we were on an important quest or making a perilous escape, even though the grown-ups were close behind.  I also remember my first fall when Grandpa was leading Ginger to the schoolyard across the street and I was riding with the faded red bareback pad.  She stopped abruptly on a steep hill and I tumbled to the ground over her neck, unharmed.   I remember my grandma being worried, while Grandpa and I exchanged amused smiles.

When I was nine, my grandmother's health declined and they decided to sell the house on Ranch Elsie and move to New Mexico.  By this time we had moved to our property in Vista Grande Estates, where I spent all my school years.  We had five acres and a one-of-a-kind home that my dad designed and built.  My mom later told me that it was my dad's idea to bring the four horses to live with us.  Grandma and Grandpa had welcomed him so warmly into the family, and Grandpa did all the electrical wiring in our house. Papa felt indebted to them and also knew how much the horses meant to my mom.  And so Taffy, Kishta, Tinker and Ginger all came to spend their senior years with us, and the family rides resumed.  I'd grown too big for Ginger, so sensible Tinker became mine. As the horse bug took hold, weekend outings soon weren't enough for me, but I wasn't allowed to ride by myself.  My dad was still building  the house, they were both working and they maintained an enormous garden, so I had to make do with the time they had to ride.

Luck was on my side, however;  one summer a new family moved in down the road - a girl close to my age, with horses!  Misty had a red roan Tennessee Walker mare named Rosebud, and a bay Appaloosa with one spot named Baby.  With horses in common we became fast friends, even though she was a year or two older.  I wasn't strong enough to lift our old Western saddles, so if my parents weren't able to help me tack up, I rode bareback, and really preferred it.  Misty and I played outlaws, pioneers, jockeys, and spent hours in the woods and on the country roads.   Often we'd be struck with fits of giggles so outrageous that we could hardly stay on as the horses trotted faster and faster.  I remember once we were riding Rosebud double bareback and fell off in tandem.  We rode to the end of County Road T. which opened up to beanfields on both sides and raced on the clay lanes. We tried to teach the horses to barrel race in Misty's pasture and Tinker ran away with me into Misty's pond.  There was a herd of "wild horses" in a nearby pasture that we would visit and admire, naming every one.  Our favorite was a curious chestnut we called "Jacket" because he liked to nibble our pockets.  Tinker went lame for a while and Mama let me ride Taffy while she was recuperating, who I renamed Gold Rush and injected whole new story lines into our adventures.  Misty started riding less and less as she became more interested in junior high boys, and eventually moved away.

During this time I begged my mom to let me ride alone, and I was finally allowed when I was twelve.   Tinker was a perfect first horse, enduring everything from my attempts at circus tricks to equine hairstyling sessions.  I would ride in cutoffs and laceless Keds, sometimes abandoning my shoes on a tree stump or fence post, and didn't own a helmet.  My favorite memory of Tinker is coming home one summer evening through the marsh, just after dark, fireflies dancing around our legs.  They were uncommon in that area, and that summer was the only time they lit the meadow. By then, Stacy and I were best friends, and she had a palomino mare, also named Ginger, who she showed in 4H.  I was so jealous of her ribbons!  I began to enter Tinker in photo horse shows, and spent hours bathing and grooming her and taking pictures with my little pink 110 camera.  Soon I had my own wall full of ribbons.  I also registered her with the Older Horse Registry, and had a story about her published in the member newspaper. I asked for an English saddle for Christmas, and my grandparents delighted me with an enormous box containing a cognac-and-tan all purpose saddle they'd found used, which was a miracle in cowboy country.  I tied red and green ribbons in Tinker's mane and felt so proud as we took a holiday ride around the neighborhood in our exotic new saddle.  I bought horse magazines every time we went to the corner store,  videotaped the Rolex and Budweiser jumping events and watched them over and over, dog-eared our tack catalogs and pored over the farm and ranch classifieds in the Cortez paper.  Tinker was then 28 years old, and couldn't quite keep up with my ever-increasing ambitions. To be continued...
Posted by Lara Elizabeth at 7:18 AM