I started Coro on Tri-Hist on Saturday, and yesterday afternoon he had a slightly runny nose but no wheezing, flaring or fluttering.  Truly like night and day. Could it really be that easy? The medication is not super expensive, either.  Not only did he sound better, he clearly felt good, as he dragged me around the arena, doing this little defiant grunt every time he stretched down and blew.  I kept feeling him bunch up in his back and I knew there was a buck in there.  I was right, but I think he really only kicked out.  We worked for a long time until I had more of his attention, and had some meetings with the rail, and then I did some ground work and lessons in patience with him after I got off.  The two TBs who are boarded in the paddock right next to the outdoor arena were out grazing, and they seem to have become a security blanket as Coro was quite unhappy to be working ALL ALONE, or perhaps just without an audience.  In any case you wouldn't think we've been taking dressage lessons for nine months now as Coro looked less like this: 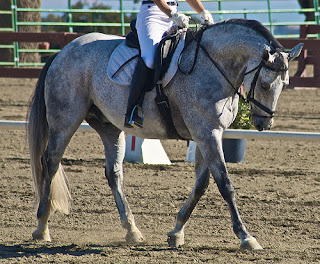 And more like this, a return to his roots (in fact he felt closer to gaiting yesterday than he has in a long time - his little legs were just a flurry while I glided along in the saddle):

In other news, I tried out a 13 year old QH mare this weekend who I have not been able to stop thinking about.  There is much to consider.  I think that Coro may have been trying to demonstrate that he is not ready to relinquish his position as Numero Uno. 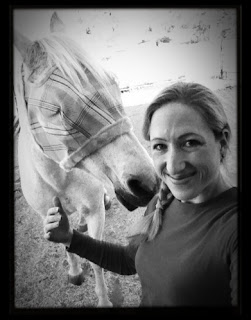 Posted by Lara Elizabeth at 7:44 AM