By Any Other Name...

Taking a cue from Val's mom, I thought I'd delve into the stories of my horses' names.  I mentioned in my 2012 review post a bit about how Dani's name came to be, but there are two other tails to tell and a little more to hers, as well as exploring the evolution of nicknames.

I put a lot of stock into animal names, and personally prefer more dignified/distinguished names over cute or silly, and especially over more common "people" names like Joe or Mike.  My dogs are both named after goddesses (Lasya and Freya) and I call them my doggesses.  I adore place names, too, reflecting an animal's heritage such as Oslo for a Norwegian Elkhound or Berlin for a German Shepherd.  My itty bitty kitty is named Nina after one of my favorite bands at the time I got her fifteen years ago, Nine Inch Nails.

I did not rename Coro (just changed his barn name slightly), although my mom and I were tossing around Spanish ideas in the car on the way to look at him.  When I found out his registered name was El Corazon, I swooned, knowing even then he was meant to by my heart horse.  They called him Corey for short, which wasn't going to fly with me.  It was a popular name at the time and I had several schoolmates with the moniker.  Obviously Cora was a girl's name, so Coro it was.  Even the shortened version had its own translation - coro means "chorus" in Spanish.  Back when he was a deep nearly-black before dappling and whitening into his current freckled coat, we called him Coro El Moro = Coro the Moor.  My mother also called him Cornley fondly.   Now that he is the sole male of my menagerie I often simply refer to him as "The Boy."

Notchee also kept the name she came with, barn and registered name the same.  We never could figure out the significance of her name - nothing similar on her papers as her sire is El Azraff Navajo and her dam Sonora.  Since she is a black bay we did wonder if it was an odd spelling of noche, Spanish for "night."  Somehow it evolved affectionately into Swatchkin.

Dani Girl is registered as Danika, by Dejado Habano ("lost cigar" (?) in Spanish) and out of Amber.  Danika has the modern counterpart of race car driver/Go Daddy spokeswoman and just had no real resonance with me.  Her barn name was Nikki, another name with human references in my life.  Shortly before meeting her a favorite writer of mine, Ray Bradbury, passed away leaving his legacy of strange and wonderful stories, among them a book very dear to my heart since reading it in high school, Dandelion Wine.  The book is filled with themes of summertime nostalgia and eternal youth, and since I brought her home on the Fourth of July it seemed perfect.  I could also call her Dani for short, not a drastic departure from her given registered name.  I did attempt to have her registration changed but the IALHA has a new rule requiring the permission of the breeder, which I was unable to obtain.  I think Dandelion Wine with its sunny gold connotation might better suit a plump palomino show pony than a tall, dark beauty, but I love all it represents for us.  I'm sure she'll develop nicknames over the years; for now she is often called The Princess and The Tall Bay. 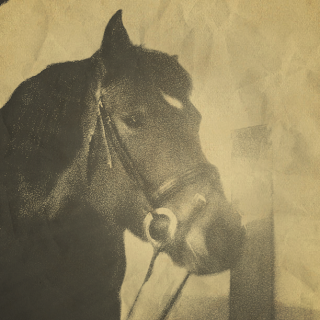 In this photo Dani looks both one-eared and also very much like her grandsire and barnmate, Esteban B.

Posted by Lara Elizabeth at 8:14 AM